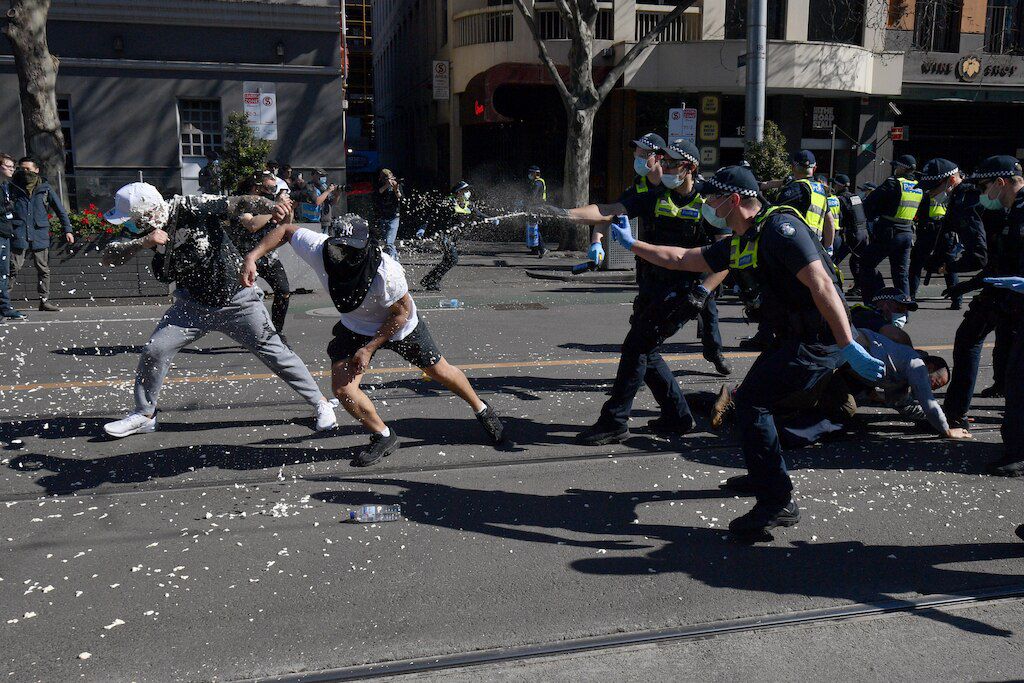 Thousands of anti-lockdown protesters in Australia have clashed with police.  There have been clashes in Melbourne, while many arrests have also been made in Sydney.  Both cities are under strict stay-at-home orders as the delta variant continues to surge.

In Melbourne, thousands of people defied the authorities to march in the city center.   Protesters clashed with the police, and videos posted on social media have shown chaotic scenes in Australia’s second-biggest city.

Many arrests have reportedly been made in both cities, which are under some of Australia’s toughest-ever lockdown restrictions.

Earlier, authorities in New South Wales state announced Australia’s worst day of the pandemic so far, with 825 new COVID-19 infections in the state.

State Premier Gladys Berejiklian says the delta variant is so contagious that Australia’s long-held strategy of trying to eliminate the virus is over.

“We can’t live in our bubble forever,» said Berejiklian. «The challenge is that every state has to live with the fact that once you get to 80% double doses and your population is allowed to live more freely, the delta variant will creep in.”

Authorities are making a final push to stop the worsening COVID-19 crisis in Australia’s biggest city.

Sydney’s lockdown is being extended and it’s getting even stricter.  There will be a curfew in virus hotspots, masks must be worn outdoors, and the police have even tougher powers to enforce stay-at-home orders.

Mass vaccinations are continuing as the number of infections rises.

WOMAN 1: “With the cases today, yeah, we’re very happy we’ve been able to come here and get vaccinated.”

WOMAN 2: “It’s a really scary number.  To think that even last week we were concerned about it and now it just seems like it’s getting out of hand.”

New Zealand has extended a nationwide lockdown until at least Wednesday as a cluster of Covid-19 infections has grown to more than 50 cases.

“We just don’t quite know the full scale of this delta outbreak. All in all, that tells us we need to continue to be cautious,” said Prime minister Jacinda Ardern.

Health officials in New Zealand have linked the delta variant infections to a traveler who returned from New South Wales two weeks ago.

New Zealand has reported about 3,000 COVID-19 cases and 26 fatalities since the pandemic began.

Australia has recorded 42,200 coronavirus infections since the start of the pandemic.  Nine hundred seventy-four people have died, according to the Health Department.

Both countries closed their international borders to most foreign nationals in March of last year.